On Saturday night our team of investigators stepped back in time to to play the ITM Games murder mystery dinner party “Teddy Bears Picnic”.

The plot of “Teddy Bears Picnic”

It was the fifth anniversary of Edwards Toys, the company formed by Chester Toyes, Penny Whistle and the late Theo Edwards. Preparations were in hand for the launch of a new Teddy Bear range called “Teddy Bears Picnic”.

The City Adventurers had been invited to join Chester Toyes at the launch of the new range. We gathered at E-Four Indian Fusion in Chingford that was doubling as Edwards House, former home of the Theo Edwards. The house was still occupied by Theo’s widow, Babette, and her new husband Chester Toyes.

At 5pm, Chester Toyes was found murdered by the side of the lake. The body was discovered by one of the security staff and Ryan Storey, a journalist on the estate. There were multiple stab wounds to the body. No murder weapon was found…….

Who could have done it?

Well, it turns out it was one of us!

But was it Babette Toyes, making herself a merry widow for the second time?

Or did his business partner, the designer Penny Whistle, have designs on taking over the company?

Had Chester become too personal with his personal assistant, Carrie Honor Fair ?

Maybe the accountant, Kash D Spencer, felt it was time to cash in Chester’s chips.

Did Ernest Statements, Chester’s  right hand man,  have anything to state?

And don’t forget the journalist, Ryan Storey. Did the hack take a knife to Chester?

We all had clue packs with information about ourselves and about the others around the table. We also had a map of the house and grounds to help our investigations.

A fun night, with great food and a great game. 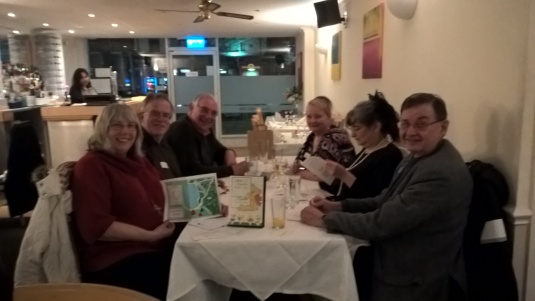 Want to try it for yourself? “Teddy Bears Picnic”  is available from ITM Games  at http://www.itmgames.co.uk. Check out their other murder mystery games too

One thought on “At this “Teddy Bears Picnic” things are not as innocent as they seem!”