That wasn’t going to affect a new group of Hollywood hopefuls. Wannabe producers, directors and actors  were transported back in time this November to the 1950’s……. 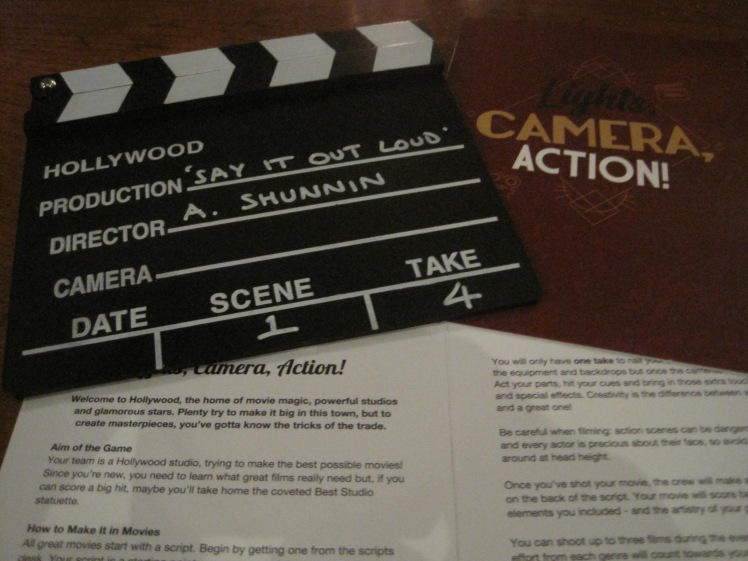 A Door In A Wall’s newest interactive production

Our team assembled at Mirth, Marvel & Maud in Walthamstow. The current building opened in the 1930s as a Granada Cinema, but there are records of films being shown on the site as early as 1896. A fitting venue to start our new production company.

Our team were among the first “Hollywood high rollers” to try out the new production by A Door In A Wall. We joined other hopefuls eager to learn the secrets to making a successful movie. Unlike A Door In A Wall’s earlier interactive games, this was not a murder mystery. Instead of solving a crime, we were tasked with producing mini movies.

To help us, we were provided with scenes to act and scripts to follow. We were told improvisation was allowed, so we ended up ad libbing most of it.

Groups of 3-6 were recommended and I was sure I’d read somewhere that not everyone had to appear on screen. We had one person had to drop out on the night, so our “company” was down to three. Not to worry as the game can be played by two. However this requires both of you to act. With three of us we were able to choose between two or three player scripts.

It took a while to relax into being on screen. But by the end of the night we were all having fun being a star.

As well as learning our lines we had to decide on props and costumes. We also had to get pointers from Hollywood stars and production crew on what to include in our movies. This was the interacting with characters bit of the evening.

Costume suggestions were 1950’s and some groups went for the Hollywood glamour look in a big way. In fact, at some points, it was hard to tell the real actors from the participants.

The evening ended with a glitzy ceremony to honour the best efforts. With so many teams taking part they were only able to screen the best ones. It was a pity we haven’t got to see our finished products. (Yes, I know. I’m shocked we didn’t win ) It would have been good to  see the finished films we’d made. A follow up email suggested we would be sent details and links to our efforts, but unfortunately that hasn’t happened.

UPDATE: Since writing this blog I have received a link to the movies made on the night. I’m not at liberty to share those made by other film producers and, while I’d like to thank the cast, crew, writers etc for our wonderful productions, the background noise requires me to withhold screening ours. That’s my story and I’m sticking to it.

Want to join our mailing list and be sent details and offers for clue solving adventures and exploring city adventures? Just click the link and join the club http://eepurl.com/dtu8ln