The latest treasure hunt organised by Treasure hunts in London took place at the V&A Museum.

This museum was founded in 1852 and named after Queen Victoria and Prince Albert. It is the world’s largest museum of decorative arts and design, housing a permanent collection of over 4.5 million objects.

This year the V&A was awarded the Art Fund Museum of the Year 2016 prize. Stephen Deuchar, Art Fund director and chair of the judges, is quoted on the V&A website as saying:

‘The V&A experience is an unforgettable one. Its recent exhibitions from Alexander McQueen to The Fabric of India, and the opening of its new Europe 1600-1815 galleries, were all exceptional accomplishments – at once entertaining and challenging, rooted in contemporary scholarship, and designed to reach and affect the lives of a large and diverse national audience. It was already one of the best-loved museums in the country: this year it has indisputably become one of the best museums in the world.’

Teams set off to explore the museum  and find objects with a Scottish connection. After the hunt everyone met for a well earned glass of wine. 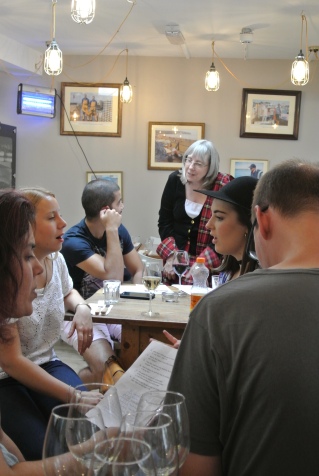 The prizes for winning included some British Shortbread. While shortbread-like biscuits have been made all over Britain for centuries, it is usually associated with Scotland. The first printed recipe appears to be by Mrs McLintock in 1736.

Want to come on a city adventure?

Sign up for my newsletter for special offers on events.